Today, I had the opportunity to volunteer my time to help paint a mural for a welfare center through a Korean activity group called Meari which was Korean for “echo”. The group consists of college students and workers alike, who have a common interest in going out and doing activities such as hiking, swimming and skiing.

I was quite nervous at first, as my Korean isn’t even close to fluent and I’d be meeting a bunch of people who speak it as they’re native language. I also never painted a mural before, and I wasn’t sure how good of a job I’d be able to do. We started the day at around 10 at the welfare center and walked to about half a block away to paint this old shed in the neighborhood. Although there were a lot of conversations I didn’t pick up very well, I didn’t feel completely awkward and they were very friendly towards me.

We spent about 2 hours painting the base layer and outlining the characters onto the walls. I was a little bit hesitant to draw anything at first because I was afraid I would mess things up, but with a little encourage from the others I took the dive. By the time I finished sketching the first character, things began to become very fun. It was like a breath of fresh air as I got to paint something for the first time in a while. There were about 3 groups and we were all working together to finish one project. It was an awesome feeling to see all these people despite their busy schedules donating their time for a good cause. 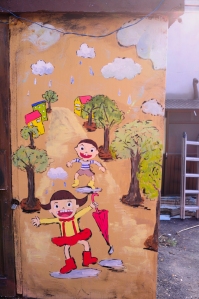 They served us lunch and we walked around a bit and lingered at a nearby park. We were working out with the equipment and it made me feel like I was in grade school during recess again. We talked a little bit about their military service and experiences in life. I never thought I’d be doing these kinds of things in a foreign country, but I’m glad I was able to get such an opportunity. It was very refreshing.

Interacting with the teachers was very funny as well as I would sometimes only understand 50% of what they were saying and just play along and hope for the best. They were also recording the event, but I’m not quite sure what they were doing it for. We spent about 4 additional hours finishing up the project. To be honest, I almost didn’t believe we would finish it on time, but it felt so rewarding after all the work. It was a very cool experience meeting new people and hanging out with them for the majority of the day, speaking Korean and immersing myself in Korea culture and life. If you ever come across an opportunity like this in Seoul, I highly recommend it! It could be worth your while!