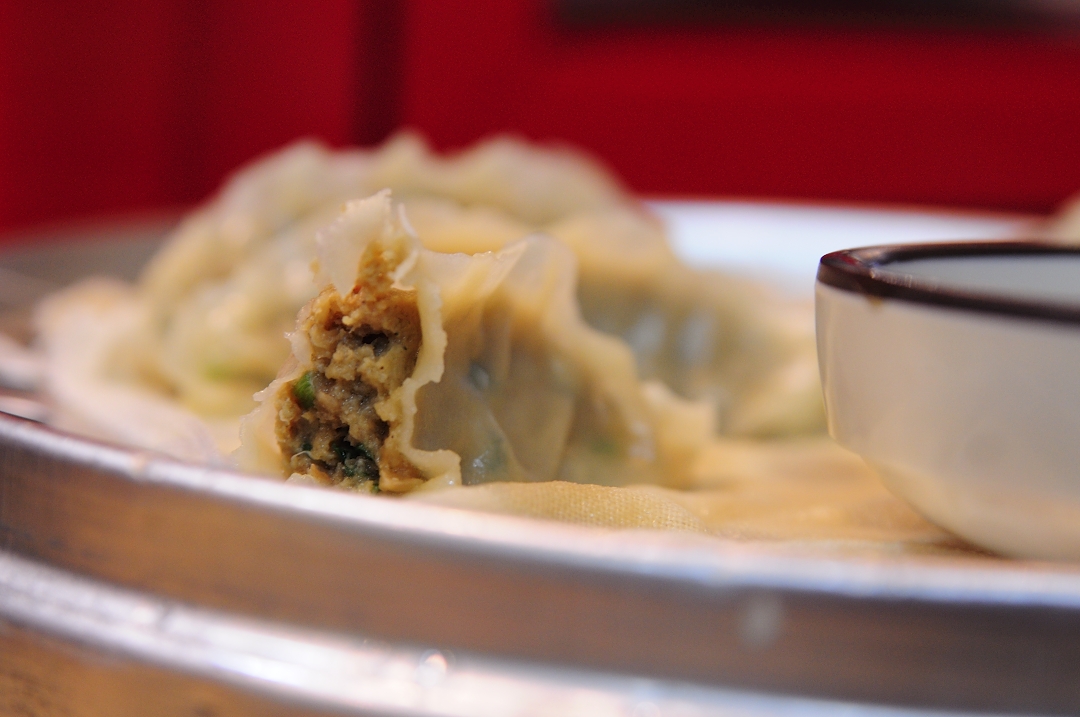 Whenever I come across a dumpling shop with open windows and steam blowing everywhere, i just have to check it out. Mapo Mandu fit that bill and the prices were pretty cheap as well. They have multiple locations, but the one my friend and I went to was in front of the 2nd exit of the Daeheung Station (대흥역) Line 6. You can also find other locations through Seoul by typing (마포만두).

The Daeheung (대흥) location we went to was really crapped and tiny, and personally I didn’t feel very comfortable at the window bar. It was pretty hard just to take pics of the food because of the lack of space. The waitress didn’t do a particularly good job of cleaning the table and her lack of attention to detail gave me a bad impression. The restaurant itself was bigger than the Family Mandu (페밀리 만두) I went to, but I didn’t feel nearly as comfortable because it wasn’t so clean. They also didn’t have the common sense to give us individual plates, so the food kept dripping on the table. No wonder why the tables were kind of dirty! The Yangjae (양재) location I went to much better in terms of space and tteokbokki (떡볶이), but I recommend both.

I’m told this place is famous for their Galbi Mandu (갈비만두) which uses marinated rib beef cooked with charcoal as their primary filling. I ordered 1 of those for 3000 won and a tteokbokki (떡볶이) 2500 won. The rest of the menu seems worth trying as well, but I like to stick to the basics.

The mandu comes in a set of 10 and are pretty tiny. However, what they lack in size, they make up in flavor. I’ve never had such tasty dumplings. The filling is primarily galbi and gives the mandu a burst of sweet, charcoal meat flavor. I was really impressed and it almost made me forget that I was extremely full from the restaurant I went to before…almost. The wrapping was very tender and moist, which is a plus as well. The sauce wasn’t overly salty and complimented the mandu very well, but isn’t necessary.

The tteokbokki (떡볶이) was ok, but not nearly as good as Jaws. The sauce itself had a good kick and was borderline watery. The tteok (rice cakes) however, was a bit on the soft side and didn’t absorb the sauce very well. The metal tray they served it in was a nightmare as well. Basically when you tried to pick up the tteok, the tray would spin around like a lazy susan because the surface was too slippery. You had to eat it with two hands, and as mentioned,  the sauce got on the table a lot because we didn’t have individual plates.

Update January 24, 2015: So apparently despite being franchised, the tteokbokki (떡볶이) differs depending on which location you go to. I went to the location in Yangjae to find much better tteokbokki that was similar to Jaws but less spicy and salty. They used thicker and shorter rice sticks which I tend to favor as well. It had a much thicker sauce as well. Although slightly more expensive at 3000 won, it’s so worth it. High recommended!

I also ordered the sundae from the Yangjae location for 3000 won. It was pretty typical, and if you like sundae you’ll be satisfied with it.

Overall, I like the food, just not particularly the Daeheung restaurant layout. I went to the Yangjae location which was much larger and had way better tteokbokki. It is a bit strange that there are some inconsistencies between franchised stores, but I’m not going to complain. All you have to do is search for 마포만두 on Naver or Google and look at the street view. Been to any of their other locations with a better dining experience? Let me know in the comments below!