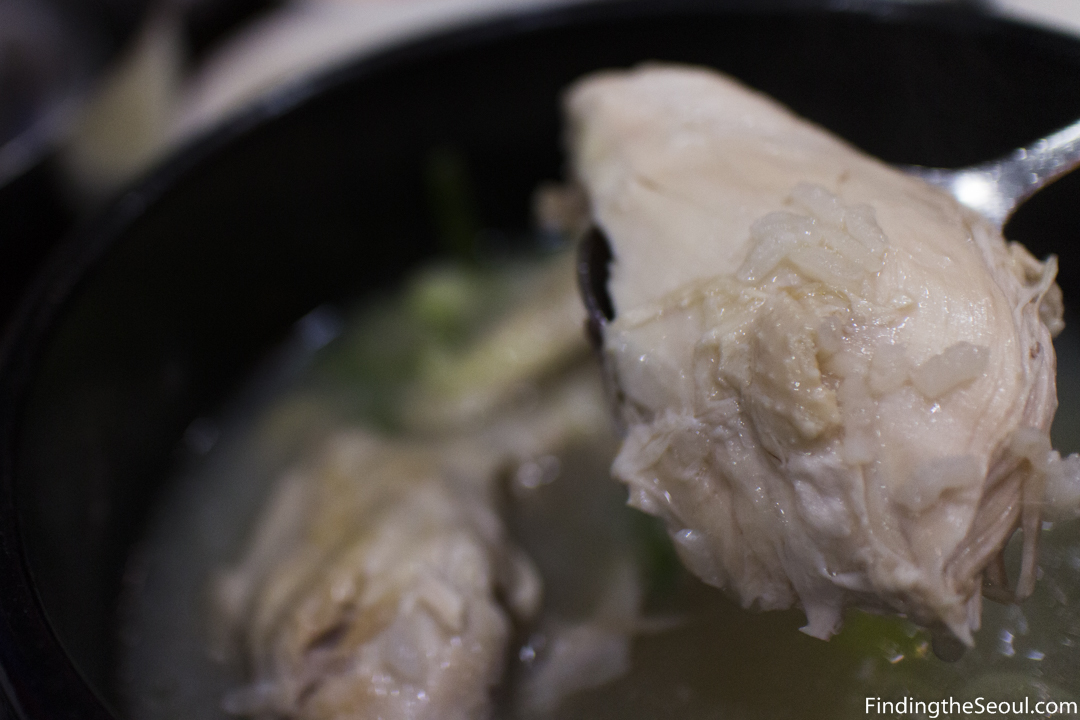 With this hot and humid weather in August, we decided to treat ourselves to some samgyetang (삼계탕), or ginseng chicken soup. I’ve never had it before and to be honest the sound of ginseng flavored soup was quite a turn off as I really hated herbs such as ginger or ginseng.

However, many Koreans swear by it and say it provides vitality during such extreme weather, so I decided to give it a try at a place called 궁 삼계탕 (Goong Samgyetang). The “goong” has a royal connotation, so it meant something to the extent of “Royal Samgyetang”.

You can find this place by going out of Gangnam station exit 4. It’s located under an office building.
The address is as follows: 서울특별시 강남구 도곡로3길 13 르-메이에르 타운

The atmosphere was very Asian inspired with gigantic lanterns swaying surprisingly effortlessly from the fans and the wind. I felt like I was in a drama set or something with such over-the-top decor, but it was kind of cool and didn’t feel overly gaudy. They have seated and floor arrangements, and the establishment felt fairly clean. My guess is they tried to make it seem like  a royal palace to match the name. The best part was, the AC was set perfectly and it really allowed me to enjoy my food, unlike a certain other restaurant.

I ordered the basic samgyetang as I was trying it for the first time. The samgyetang came out bubbling hot and actually looked pretty bland with the exception of the green onions. The aroma was quite bland as well, kind of like chicken broth. The pictures are a little misleading because the bowl is actually a lot bigger than it looks. That’s about an 6-7 inch chicken stuffed in the bowl. I was pretty much the only one that finished by meal.

While the dish happened to be bland by most standards, it had a subtle flavor of pure, unadulterated chicken stock that suits my sensitive palette. There was no overpowering ginseng flavor as I had once imagined. Although the flavor was perfect by my standards, you could always add pepper and salt to adjust to taste. The chicken meat was so tender and pulled right off the bone. Sometimes you’d get a bit of cartilage, but it was easy to eat as well. It tasted very similar to the chicken you’d get in chicken noodle soup, except it was far less processed.

They also had rice in the soup, which made it a big hit for me. I even ended up ordering another bowl of rice to make full use of the broth!

Needless to say, my first experience with samgyetang was very positive and it was a nice break away from the typically salty and spicy soups that comprise the majority of foods that Korea has. I was very satisfied by this particular offering, but cannot say if it is better than any others that I have tried as it was my first time. I was however, disappointed with the side dishes (or lack of). I wish there was a more complete offering at hand, but perhaps this is typical with samgyetang restaurants as well.