As if I hadn’t had enough sushi this week, I went to Qoo Qoo (쿠우쿠우) sushi buffet in the popular Hyehwa area. It’s not as high-end as Todai, but it’s way more affordable. They have multiple chains throughout Korea as well. You can access this location by heading out of Hyehwa Station (혜화역) exit 4, bearing left where Starbucks is and reaching the end of the road. It will be on the second floor. 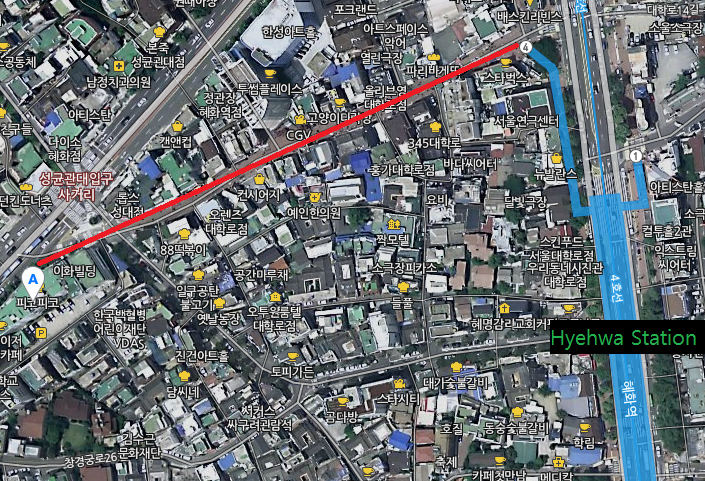 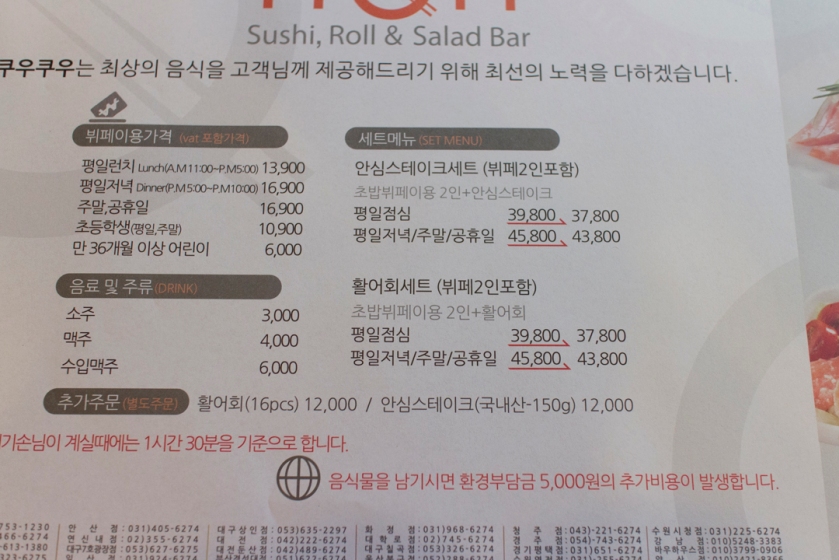 The atmosphere was pretty typical of a sushi buffet restaurant and modern restaurants in general. Everything was very clean with a more modern feel to it. There was plenty of lighting and it felt very bright and welcoming. 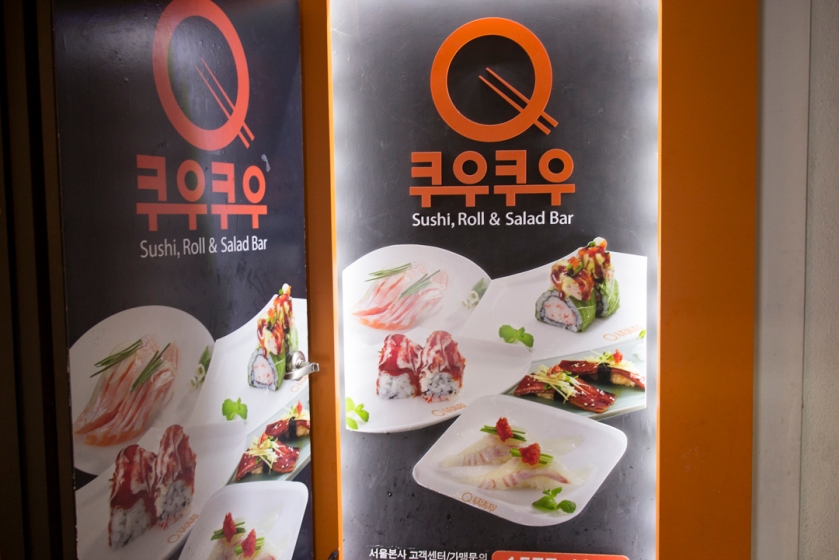 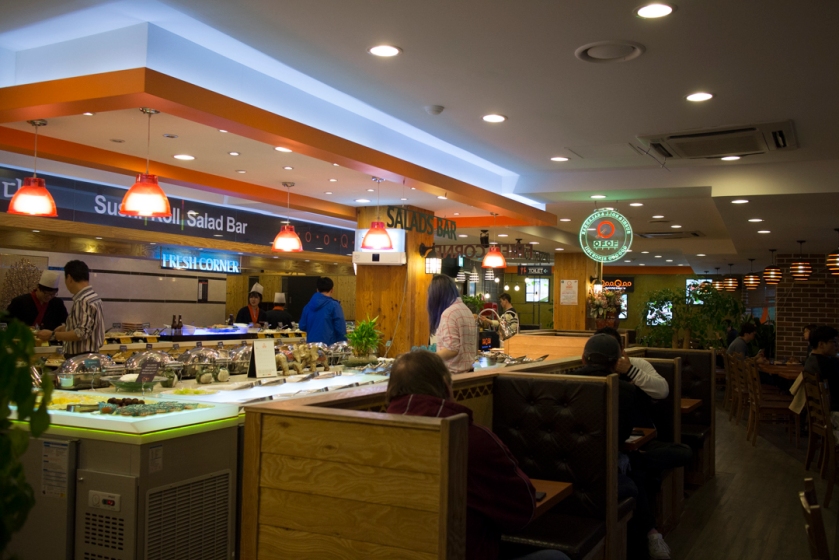 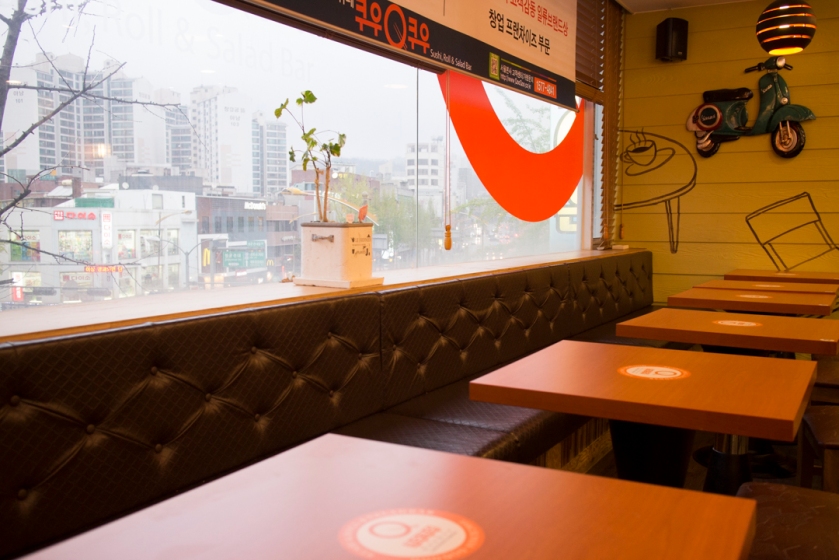 A good majority of the sushi was California rolls without avocado (because that stuff is more expensive than gold here) topped with random ingredients such as eel, various fried animal pieces, fish, and etc.

I usually associate this kind of sushi as pseudosushi, but it wasn’t so bad in the grand scheme of things. They all tasted rather similar because of their base and frankly, I had a hard time distinguishing the differences. They felt rather monotonous as the meal progressed.

They did offer a fair share of nigiri sushi, but frankly speaking only a few of them appealed to me based on looks. The eel nigiri is always a winner, no matter how bad the quality is. This one was no exception. Another surprise was the fake crab meat as it had a much closer consistency to real crab. Truth be told, I couldn’t tell if it was real or fake as my mindset was to just eat large quantities of food mindlessly. Regardless, I enjoyed it.

I also fairly enjoyed the omelette (tamago) nigiri. It had some terriyaki sauce over it with some other topics. It was sweet and savory.

The salmon nigiri wasn’t too bad, it tasted reasonably fresh and wasn’t overly chewy or hard.

Overall the sushi was satisfying, but nothing to write home about. I generally am not a fan of the quality of sushi from a buffet as it doesn’t have the same care as a place like Byeol Sushi. However, if you’re a fan of sushi buffets, you’ll probably come out quite pleased.

Most of the fried foods were quite dry and unappetizing. Most of them were under heat lamps which dried them out. They had a variety of sauces, including cheddar, which made it easier to eat. 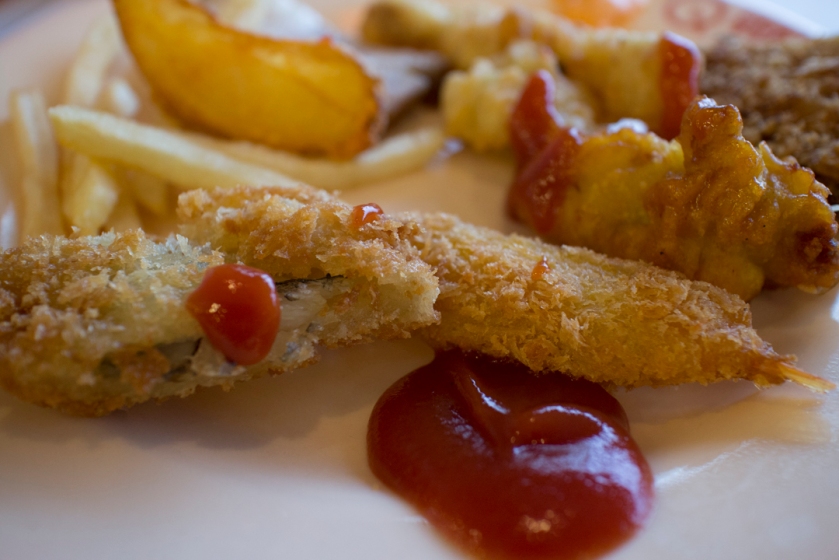 There were a variety of sausages on a sausage roller that I was excited to try out. However, they turns out surprisingly cold and dry, which ruined the experience.

There was a pizza which was surprisingly good. It was very cheesy and light.

I found the udon interesting as you had to add the soup to prepackaged ingredients. It was almost like instant udon. The noodles unfortunately had the same texture as instant udon. I think the soup wasn’t hot enough which led to this.

The dessert section was surprisingly decent. They had a couple of pastries, but what really made me happy was the fresh waffles. They have a worker making waffles regularly which you can add whip cream or ice cream to. I had 2!

They also had ice cream and fruits. You can add toppings such as mochi and corn flakes to the ice cream. They only had milk flavored ice cream, but I was fine with that. I was very satisfied with the dessert section.

I came out fairly satisfied for a buffet, but I can’t recommend this place to everyone. If you enjoy buffets and are use to their quality, you will most likely be satisfied as well. It didn’t have quite as much of a selection as Todai, but it costs half as much. Like most buffets, there are only so many good things they offer and you’ll most likely just stock up on those.