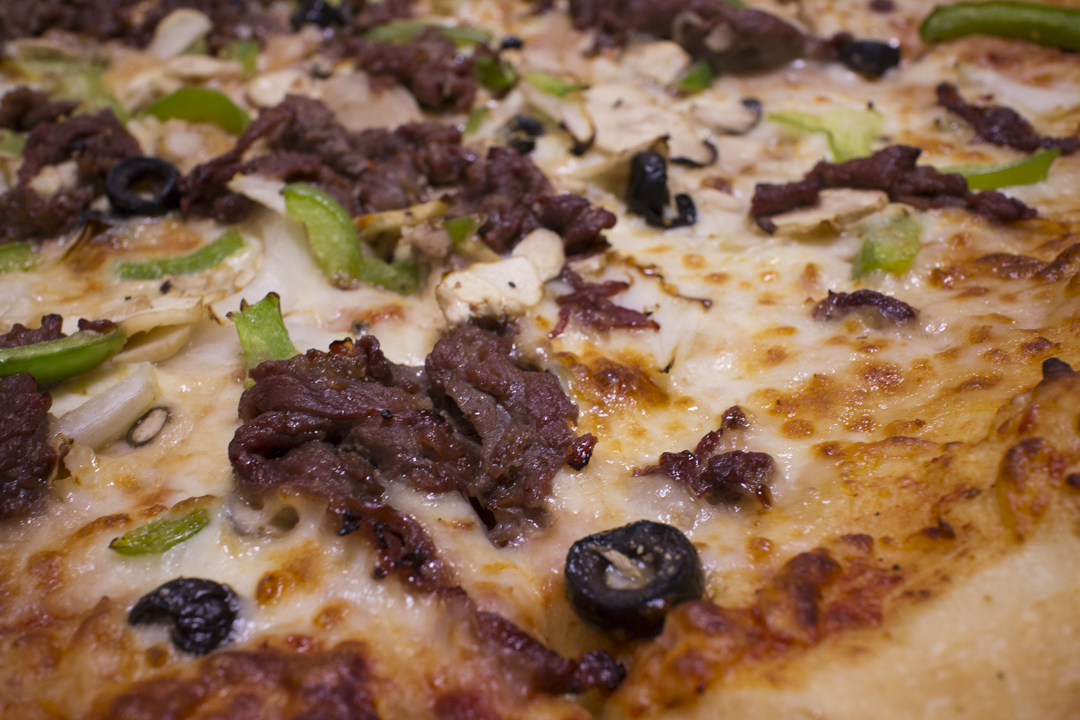 Costco (코스트코) is a huge warehouse store with a ridiculously wide selection of items at some of the best prices. They are based in the U.S., but have a few locations in Korea. They also have an awesome food court area with super cheap, high quality food as well. I was so happy to go here and see what differences there were.

The only downside is that you need a membership card to enter the building which is 35,000 won annually. The good news is, you can use your membership card at any Costco location worldwide and the savings you can get shopping at Costco will most likely offset the membership price and then some. The Costco I went to was in Yeongdeungpogu which you can access by taking the line 2 to Yeongdeungpogu Office Station (영등포구청역) and walking out of exit 3 heading west. 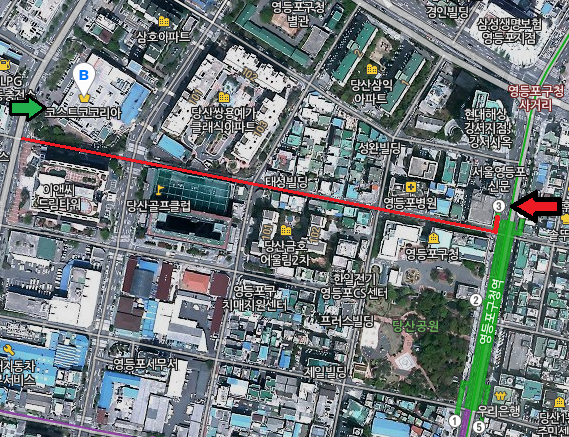 The menu is extremely simple and cheap. You can get a huge, fresh whole pizza for only 12, 500 won which is the most expensive item. I’ve only tried so many items, but overall the food selection and taste is pretty similar to their U.S. counterparts.

In a country that charges nearly 20,000 to 40,000 won for “large” pizzas, Costco is an amazing bargain. If you’ve had Costco pizza before, you’ll be happy to know that it tastes pretty similar and is just as large. They only come in one size, but you can get a single slice if you’re not feeling hungry. Some key differences are the dough tastes a bit flatter and the whole pizzas are cut in large slices as if they were served as single slices. In the U.S., they typically cut them in half slices, so I was very surprised at first. They have the typical cheese, pepperoni, and combo flavors, along with specialties such as bulgogi (불고기 피자) and sweet potato (고구마 피자).

The bulgogi pizza is somewhat endemic of Korean Costco and is packed with cheese, and large chunks of bulgogi (barbecued beef). There are olives and bell peppers to top it off. This pizza is really a good value and does not skimp out on ingredients. The beef is very good, but does not add a huge depth of flavor.

A slice of combo is pretty similar to the states except they use different mushrooms and onions. I dare say the combination of ingredients tastes better than the states.It has a nice salty and cheesy balance. 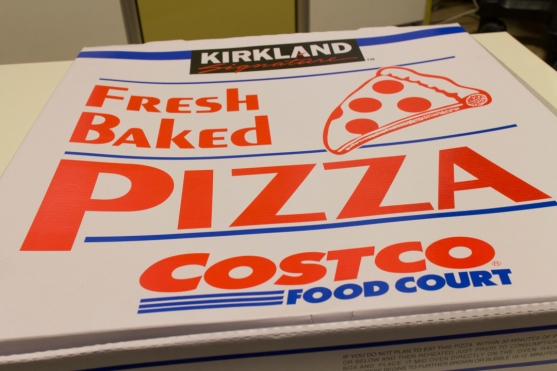 The boxes look exactly the same!

Slices to go are served in a box. 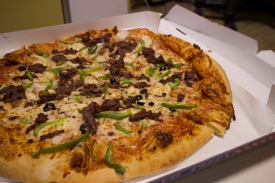 Note how large the slices are. Tons of ingredients which is unusual for a pizza at this price and size.

Tons of large chunks of bulgogi. 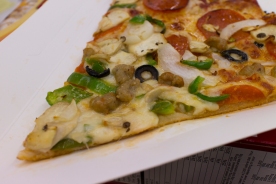 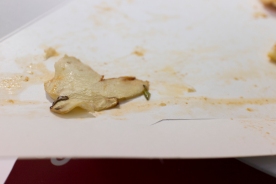 Some sort of local mushroom in the combo.

The chicken bake is one of those unique foods found only in Costco and is a mix of chicken, dressing, ham and green onions. It’s a bit drier than the U.S. Costco chicken bakes. The outer bread shell has a nice chewy consistency with the center not being too dense with ingredients. It relies on the natural flavor of chicken, but since the chicken was somewhat dried out it tasted a bit bland. It was still very palatable, but they definitely over baked it.

The hot dog is the only item on the menu that comes with a fountain soda. Exactly like the states as well. The hot dog is actually quite different from the states. The size is the same, but the bun is softer and sweeter and prone to getting soggy on the paper wrapper (they use foil in the states). The hot dog itself has a nice crispy skin and has a little spice to give it a kick. I was pleasantly surprised with the hot dog.

This was one of the items I wish I hadn’t tried. The soup was very watery and flavorless with only the mushrooms contributing to the taste. If they added heavier cream or reduced the soup more, it would’ve been more enjoyable. I can’t recommend this to anyone. It comes with crackers as well.

There was also this unique “dish” that I saw on most of tables that looked like a strange reddish mess of paste. I later found out that it was actually the onions intended for the hot dogs mixed with ketchup and mustard! I was a bit put off by the look (and thought) of it. Leave it to Korean ingenuity and their love of onions to come up with such an interesting idea. It looks like the workers have to constantly refill the onion dispenser because of this. I ended up trying to make the dish myself, but I can’t say I was too keen on trying it. The smell alone really put me off of it.

Overall, I was very impressed with the similarities and unique differences. Many of the qualities that make Costco what it is were easy to notice and this cultural adaptation is perfect. If you miss your Costco back home, definitely give Costco Korea a try! You’ll be glad you did!